This year’s Budget had a totally different feel to a normal Budget. It is the longest Budget speech that I can recall (almost 40 minutes compared to the normal 30 minutes). I don’t recall applause being interspersed during the budget speech. And, normally a Budget will offend someone, but this year there are no nasty surprises. It is also different in that it is a budget that the nation gets to vote on with an election to be held by mid-May.

To see the budget in a snapshot click here: 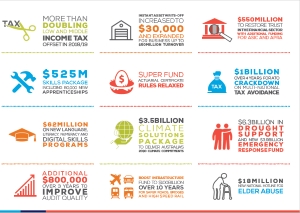 The Federal Budget reveals the first Budget surplus in more than a decade at $7.1b for 2019-20. Government forecasts show surpluses over the next 4 years totalling $45b based on forecast growth of 2.75% in 2019-20 and 2020-21. The proposed tax cuts should stimulate the economy as is it likely that most of the tax savings will be spent and so be recirculated in our economy.

The Government has again benefitted from a series of strong outcomes for commodity prices and also from strong employment growth. Low inflation has helped too. These positive factors have provided some useful room for spending.

There are a number of health initiatives including additional funding to GPs both for a new chronic disease funding model which will provide grants for enrolling elderly patients with their practices and delivering treatment over the telephone, email or Skype and lifting the Medicare rebate indexation freeze. There is also substantial funding for mental health and new PBS drug listings.

There are two significant changes in personal income taxed:

These revised amounts will apply for the financial year ended 30 June 2019 and will be delivered via an additional tax refund upon lodgement of 2019 tax returns.

Future tax scales
The government has announced a further streamlining of future tax rates reducing the 32.5% rate to 30% from 2024-2025. This will mean that under the coalition’s plan, tax scales from 1 July 2024 will be: 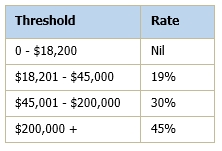 CGT Main residence exemption for non-residents
It was expected that there would be a further statement in relation to the previously announced removal of the CGT main residence exemption for non-residents. However, there is no comment in the Budget in relation to this. Some commentators interpret this and recent comments by the Assistant Treasurer at a recent tax conference, to mean that the measures are unlikely to proceed. These rules were originally to have applied from 30 June 2019 and is contained in legislation that is not yet been passed by the Senate.

Deferral of Division 7A amendments
Division 7A requires benefits provided by private companies to related taxpayers to be taxed as dividends unless they are structured as Div 7A complying loans or another exception applies. The Government issued a consultation paper in October 2018 in relation to proposed changes to Division 7A. These changes were to take effect on 1 July 2019 but there were substantial concerns in relation to the way in which these rules operated. It is proposed that these new rules will now be effective from 1 July 2020 which will allow further time to consult with stakeholders and to ensure appropriate transitional arrangements so taxpayers are not unfairly prejudiced.

More money for the ATO
The government will provide $1b in additional funding to the Australian Taxation Office to extend the Tax Avoidance Taskforce operations which focus on large corporations and high wealth individuals. In addition $42.1m will be provided to the ATO over four years to increase activities to recover unpaid tax and superannuation liabilities.

Skills funding
The Budget announced a new $525 million skills package. It seeks to create 80,000 new apprenticeships over 5 years in industries with skills shortages. The Government will double incentive payments to employers to $8,000. New apprentices will also receive a $2,000 incentive payment.

Increased EMDG Funds
An additional $60 million will be made available over the next three years to help more businesses export their products and services around the world via the export market development grants.

The EMDG scheme reimburses up to 50% of eligible export promotion expenses above $5,000 provided that the total expenses are at least $15,000. It provides up to 8 grants to each eligible application.

To be eligible for a business must have:

income of not more than $50 million in the grant year

incurred at least $15,000 of eligible expenses under the scheme (first-time applicants can combine 2years expenses) and

principal (rather than agent) status for the export business all (some exceptions apply, such as non-profit export-focused industry bodies).

The business also must have promoted one of the following:

the export of goods or most services

the export of intellectual property and know-how

conferences and events held in Australia.

Sham contracting
The Government announced that it will provide $9.2 million over 4 years from 2019-20 (and $2.3 million per year ongoing) to establish a dedicated sham contracting unit within the Fair Work Ombudsman to address sham contracting behaviour engaged in by some employers, particularly those who knowingly or recklessly misrepresent employment relationships as independent contracts to avoid statutory obligations and employment entitlements.

The work test requires that individuals aged 65-74 must work at least 40 hours in any 30 day period in the financial year in which the contributions are made. From 1 July 2020 this work test will apply to individuals aged 67-74 and is a measure to give greater flexibility as individuals near retirement.

The Government will provide $282.4 million over 5 years from 2018-19 for the release of an additional 10,000 home care packages across the 4 package levels. The Government is also providing a $320 million general subsidy boost in 2018-19 for residential aged care and 13,500 new residential care places.

One-off tax-free energy payment to pensioners
The Budget confirmed the Treasurer's announcement of 31 March 2019 that more than 3.9 million Australians will receive a one-off Energy Assistance Payment to help with their next energy bill and cost of living expenses.

The payment of $75 for singles and $125 for eligible couples ($62.50 for each member), who were eligible for certain social security payments on 2 April 2019 and who are resident in Australia, will be exempt from income tax and will be paid automatically before the end of the current financial year, subject to the passage of legislation (The ALP has indicated it would likely support such measures).

From 1 July 2020, income support recipients who are employed will report income that is received during the fortnight, rather than calculating and reporting their earnings. Each fortnight, income data received through an expansion of STP data sharing arrangements will also be shared with the Department of Human Services, for recipients with employers utilising STP.

This measure will assist income support recipients by greatly reducing the likelihood of them receiving an overpayment of income support payments (and subsequently being required to repay it).

We happily spend 30 minutes without charge with new contacts to explore relevant issues and outline how we can assist. Let us know your area of interest and we will arrange a specialist to meet with you.
Share:
Print:

Meet our team for Individual matters

We understand that you have plans to meet your personal goals. We know that finances are important and we have the expertise to make your money work for you.

Delivered to your Inbox Our informative bulletins will keep you on top of industry and financial news.

–Why Choose Saward Dawson?–
We’re part of your community